In Our Nature by Mariya Kozhanova 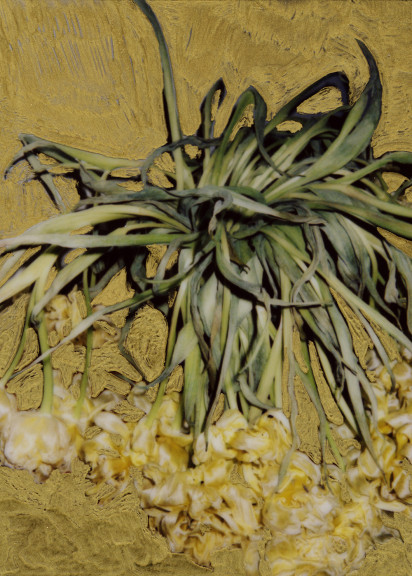 Galleri Image presents the exhibition In Our Nature by the Russian artist Mariya Kozhanova.
The exhibition opened on 14 August at 4 pm - 6 pm.

The exhibition will show brand new artworks consisting of photographs and brass sculptures, natural objects and gold as an iconic colour and material. The artworks in the exhibition are connected and lead the audience through a moving narrative about cultural frameworks in juxtaposition with the natural beauty of human beings. The purpose is to go back to the balance of nature, both outside of and within ourselves.

Gold is applied as a symbolic and decorative colour to several artworks. Kozhanova paints with a gloss paint marker with golden ink as a modern technique that maintains the art in the present day. In Kozhanova's art, gold is the transforming link between culture, spirituality and nature. Kozhanova creates the link between gold and nature by applying the Japanese technique called “Kintsugi” which involves repairing broken pottery and stones with golden paint. The technique enhances the broken and imperfect as the most beautiful parts of the objects. This transfers to the human being itself in Kozhanova's artworks, as we should consider all of our qualities as fair and natural.

Combining both traditions of west and east, Kozhanova found the way to talk in the visual forms about psychological breakage, acceptance of change, and fate as an aspect of human life.

The exhibition is open from 14 August - 20 September 2020.
Galleri Image had intended to host a seminar with the artist in conversation with Vanja Falk, curator at the Oluf Høst Museum, but due to the COVID-19 pandemic, the event is unfortunately cancelled.


About the artist:
Mariya Kozhanova, born 1986 in Kaliningrad, lives and works in Berlin. Kozhanova works with themes of human identification and has been fascinated by the powerful need of humans to believe in, and to seek for, something that lies beyond the ordinary.
In her previous work, Kozhanova created a portrait of a generation that neglected their own culture and escaped into the borrowed ideals of syntactic cosplay culture. She worked with memories and legends of her hometown Kaliningrad, which still sees dreams of Prussian times. There is a common theme of belief running throughout all of her works.
Kozhanova has exhibited multiple times internationally in the US, Russia, Germany, Japan, and China, among others.

The exhibition is supported by the Danish Arts Foundation, Grosserer L. F. Foghts Fond and the City of Aarhus (Kulturudviklingpuljen).