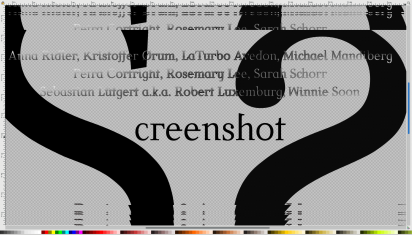 Geoff Cox:
Seeing isn’t simply a case of objective optical projections but implies a point of view, or “Ways of Seeing” (John Berger). Referring to the ongoing project “Ways of Machine Seeing”, the talk will ask how developments in machine vision further unsettle the relations between what we see and know, and then extends this to generalised automation and “desiring machines”. That machines see and learn is accounted for through a combination of calculative practices that help to approximate what will likely happen through the use of different algorithms and statistical models. The difficulty is to what extent these inherent generalizations are accurate, or to what degree the predictive models of machine learning are valid, and part of a process of reducing phenomena to their lowest common denominator. Ultimately I will argue that in addressing the problem of generalization and likening it to wider concerns over populism, we begin to understand seeing machines as machines of “social desire”. Moreover to what extent does the distorted democracy we currently experience find parallel in systems that generalize massive amounts of data in particular ways, and that reduce things to their most popular and desired form?

Kristoffer Ørum:
This specially commissioned performative lecture utilizes the props and techniques of an academic presentation in a playful and explorative manner. The “lecture” is about the present-day culture of classification, and the potential of letting go of control. It asks how we might recover some semblance of agency and hope, while we live under the gaze of ever more watchful algorithmic systems of control. Staging a series of unstable software experiments and semi-fictional narratives the performance seeks to create a situation that is out of control of the performer, the performance itself opens up to failure, loss of control and improvisation, rather than just talking about their potential. Ørum attempts to summon a dynamic and fallible digital imaginary, to counter the dominating utopian narratives of reliable and all-seeing artificial “intelligences”. “It Sings” positions misunderstanding and inaccuracy as alternatives to what seems to be a widespread sense of powerlessness in the face of sales hyperbole and fearmongering.

Katrina Sluis:In today’s screen-based photographic culture, accelerated by the convergence of the camera and phone, the ‘photographer’ has become an anxious yet self-mythologising figure, who is fighting for (his) very survival.  Cameras have become computers which can now outwit or spy on their owners. Computer scientists train neural networks to generate imagery which Wired proclaims will make photographers (and ‘indexicality’) redundant. Photographic authorship, secured through copyright law and valorized in an art world bound by aesthetic modernism is under threat. Cat photographers exhibit their work in art galleries, and photographs of them are clog up the algorithmically curated image feeds of the web. And in the time it took you to read these words another trillion images were created, albeit 95% of them by machines. Should photographers welcome this utopia of post-photographic post-scarcity? Have we become liberated from photography? And is photography to be trusted?

Winnie Soon:
The talk will centrally connect with the artwork Unerasable Images that is being shown at Galleri Image. Inspired by the concept of ‘operative images’ (Hoelzl & Marie 2015, Hoel 2018) that focuses on algorithmic procedures, this presentation will sketch out the range of operational processes from censoring machines and networked circulation to platform search and micro-temporal-spatial operations. By examining the four types of images, screenshots, projected visual, photographic slides and networked images, this talk will unfold a custom-made sorting algorithm in order to think about what images do and to explore the materiality of operative screenshots.

Michael Mandiberg:
What potentials and pitfalls can be found within our digital labor economy? What are the particular poetics and politics of the information age? In this presentation, Michael Mandiberg will talk about their attempt to digitally track and quantify their life, time, and labor from January 1 to December 31, 2016 using the self-tracking tools of the Quantified Self movement. Also known as “lifelogging,” Quantified Self is a trend in which users aspire to self-knowledge through meticulously tracking their data. Rather than helping the artist develop a more streamlined schedule or healthy relationship to technology, Mandiberg’s dataset, represented in the exhibition in Quantified Self Portrait (One Year Performance), presents a portrait of the artist as a microcosm of a pathologically overworked and overbooked society. Mandiberg will discuss the ramifications of the digital knowledge economy on our physical, emotional, and mental states, using Quantified Self Portrait and other recent work to explore the excesses, pleasures, and sadness involved in digital labor.

LaTurbo Avedon:In this presentation LaTurbo Avedon will share a quick glimpse into the rise of avatar identities in popular culture, and what comes next in a world of composites. For the past ten years they have explored the relationship of avatar identities both inside virtual spaces and their crossover into the physical world. Guests will also be able to chat with LaTurbo in a virtual Q&A that follows.

About the speakers:
Geoff Cox (UK/DK), PhD, is Associate Professor/Reader in Fine Art at Plymouth University and Associate Professor/Lektor in Digital Design and Information Studies at Aarhus University, currently engaged (with Jacob Lund) on a research project The Contemporary Condition funded by The Danish Research Council.

Kristoffer Ørum (DK) is an interdisciplinary artist, researcher and organiser based inCopenhagen, Denmark. He explores contemporary notions of the digital every day, hownarratives of lived life are circulated, and what that circulation means for the ways inwhich we live our daily lives. His work has been displayed in established institutions, such as MUSA Museum auf Abruf in Vienna and SESI' Cultural Centre in Sao Paulo as well as artist run spaces like Flux Factory in New York and projects on the internet and social networks. He holds dual MA degrees in fine art from The Royal Danish Academy of Art and Goldsmiths College. He has served as a professor at Funen academy of Art and artistic researcher at Uncertain Archives, Copenhagen University.

Katrina Sluis (UK) is Adjunct Curator of Research at The Photographers’ Gallery in London and a founding Co-Director of the Centre for the Study of the Networked Image, London South Bank University.

Winnie Soon (HK/DK) is an artist-researcher based in Denmark examining the culturalimplications of technologies in which computational processes and infrastructureunderwrite our experiences, which are ever more programmed. Her works explore themes/concepts around computational culture, specifically concerning internet censorship, datacirculation, real-time processing/liveness and the culture of code practice. Winnie’s projects have been exhibited and presented internationally at museums, festivals, universities and conferences across Europe, Asia and America. Her current research focuses on aesthetic coding in the realm of software studies, working on two books titled “Aesthetic Programming: A Handbook of Software Studies” (with Geoff Cox) and “Fix My Code” (with Cornelia Sollfrank). She is Assistant Professor at Aarhus University.

Michael Mandiberg (US) is an interdisciplinary artist whose work crosses multiple forms and
disciplines in order to trace the lines of political and symbolic power as it takes shapeonline. Building on the conceptual tradition, Mandiberg orders and reorders information,remixing the forms in which it manifests or solidifies. While technically sophisticated,Mandiberg's work eschews the novelty of new technology in favour of an exploration ofappropriation, the digital vernacular, the ways in which these new technologies impact ourlives, and the politics and poetics of technological subjectivities. This non-binary approach crosses media and evades stable categorization: from large-scale installations like Print Wikipedia’s 7,473 books, to custom software driven durational performance like Quantified Self Portrait, to socially engaged pedagogy like the New York Arts Practicum and collaborations such as Art+Feminism, of which Mandiberg is a co-founder and co-lead organizer.

LaTurbo Avedon is an avatar and artist originating in virtual space. Their work emphasizes the practice of nonphysical identity and authorship. Many of the works can be described as research into dimensions, deconstructions, and the explosion of forms, exploring topics of virtual authorship and the physicality of the Internet.
They curate and design Panther Modern, a file-based exhibition space that encourages
artists to create site-specific installations for the internet.LaTurbo’s process of character creation continues through gaming, performance and
exhibitions. Their work has appeared internationally, including TRANSFER Gallery (NewYork), Transmediale (Berlin), Haus der elektronischen Künste (Basel), The Whitney Museum (New York), HMVK (Dortmund), Barbican Center (London), and Galeries Lafayette (Paris).

About the Moderators:
Søren Bro Pold is PhD and Associate Professor of digital aesthetics. He has published on digital and media aesthetics – from the 19th-century panorama to the interface in its various forms, e.g. on electronic literature, net art, software art, creative software, urban interfaces and digital culture. He took part in establishing the Digital Aesthetics Research Centre in 2002, in 2004 he co-organised the Read_me festival on software art, and he was in charge of the research project "The Aesthetics of Interface Culture" from 2004 to 2007. Later he was research manager in the Center for Digital Urban Living (2008-2012). Currently he is leader of the research programme “Humans and Information Technology”, part of the interdisciplinary research centre Participatory Information Technology,  the research project Literature Between Media and Translating Electronic Literature: A Transatlantic Program in Collaborative Digital Humanities.
Lea Laura Michelsen is a PhD fellow (2018-) at the department of Aesthetics and Culture, Aarhus University, Denmark. She is researching the art of disappearing in an age of digital biometrics, focusing on masking and biopolitical resistance in contemporary aesthetic practices. She is editor of NJA (Nordic Journal of Aesthetics), is currently teaching the course The art of disappearing: Resistance and masking strategies in contemporary digital art, and has organized the two-day seminar: Facial machines and obfuscation in an age of biometrics and neural networks. Earlier, she worked at the Museum of Contemporary Art and at the National Gallery of Art in Copenhagen. She holds an MA in Modern Culture and a BA in Comparative Literature, both from the University of Copenhagen.

About the Curator:
Magdalena Tyżlik-Carver is curator and researcher, and Assistant Professor in Digital Design Department at Aarhus University.
Her research investigates intersections of computation and practices of participation in contemporary art and culture by focusing on 'posthuman curating'. Recent curated exhibitions and events include Movement Code Notation (2018), Corrupting Data (2017), Ghost Factory: performative exhibition with humans and machines (2013, 2015, 2018), Common Practice (2010, 2013). She is co-editor (with Helen Pritchard and Eric Snodgrass) of Executing Practices (2017) a collection of essays by artists, programmers, theorists engaging in critical intervention into the broad concept of execution in software. She is a member of Critical Software  Thing group and a member of editorial board for Data Browser series  published by Open Humanities Press. She is also Associate Researcher  with Centre for the Study of the Networked Image at the London South Bank University.
The symposium and exhibition are supported by the Danish Arts Foundation, the Digital Design Dept. at Aarhus University, the Humans and IT Research Centre, Kulturudviklingspuljen (City of Aarhus), US Embassy Small Grants Program and Grosserer L. F. Foghts Fond.