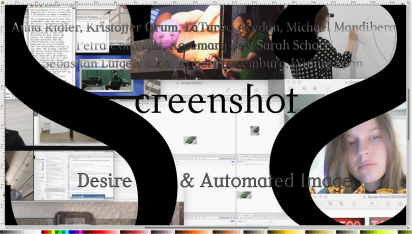 The exhibition ScreenShots: Desire and Automated Image investigates image and its apparatus of production which today is increasingly based on technologies of computation. 3D computer graphics, screen resolution protocols and machine learning algorithms are some of the contemporary technologies that are part of image making processes. At the same time, social media cultures of image capture and sharing sustain and maintain images and their production by daily labour when filters are applied, images are tagged and data is stored. All together, they constitute computer aided ecologies of image making. The format of a screenshot, originally used to represent human-computer interactions in computer-aided design, is considered here as an aesthetic form that facilitates representation of computational processes and at the same it is always in the making and unfinished. As such screenshots can be considered to capture a process becoming an image that is networked, algorithmic and subjectivised.
Artists featured in the exhibition make use of these properties of screenshots as a medium and a tool. They disrupt traditional understanding of computation by injecting their desires and bodies in order to become part of the process of image making together with data and computation. They pull in the body and its movements (geo-located, tagged and profiled) into a process of making a picture, revealing the material, performed and operative nature of the contemporary digital image.

On 27 April at 2 pm, Tyżlik-Carver will give a talk about the exhibition at Galleri Image and her thoughts behind it.