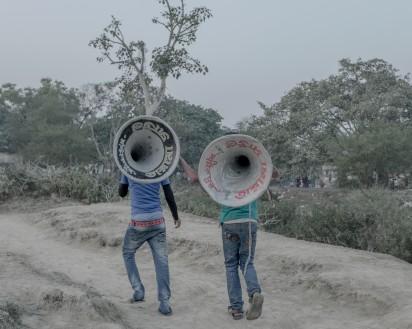 Picnicking is far from a simple affair in eastern India. In a land where the fleeting months of December to February offer the only time to ‘enjoy’ the otherwise unbearable tropical sun, picnicking is a winter pastime that’s taken very, very seriously
.
Buses and cooks are hired as groups of families, friends, neighbors and colleagues travel far to claim the perfect picnic spot, preferably around the innumerable rivers traversing the landscape, from the Ganges downstream to the Rupnarayan, Icchamati and myriad other tidal rivers close to the Sunderbans. Vats of freshly slaughtered chicken, sacks of vegetable and an arsenal of pots, pans and gas cylinders are lugged along, taking cooking en plein air to a whole new level.

Yet the most curious detail is, by and far, the extravagant loudspeakers that come with nearly every picnic group. Transported in their own hand drawn carts or mini-vans, separate generators are also brought along to pump up the electricity in the great outdoors. Songs from recent Bengali and Hindi blockbusters blare high above permissible decibels. Drunk on whiskey and rum, men of all ages brawl, dance their hearts out or pass out, as wives, girlfriends and children watch.

PIK-NIK by Arko Datto, with photography and video work done between 2014 and 2019, takes a look at these yearly picnics as a phenomenon, their cultural meaning, and the environmental imprint that is left on the nature after each event.

The exhibition is curated by Peggy Sue Amison.

On May 4th, the same day as the artist talk at 15.00, Galleri Image hosted a book launch of our new publication New Tactics - moving in a soft field. You can read more about the event here.

Arko Datto (b.1986) is a photographer based in Kolkata, India. In his photographs, he works as an observer and commentator on critical issues. He studied photo journalism at the Danish School of Journalism in Aarhus, and has masters degrees in Pure Mathematics as well as Theoretical Physics and Engineering. He has published two books, PIK-NIK and Will My Mannequin Be Home When I Return. His photographs have been published in a wide range of publications including TIME, The Washington Post, Al Jazera, and National Geographic. Arko Datto is a member of NOOR Agency and is represented by East Wing, Doha.

The exhibition was supported by The Danish Arts Foundation.